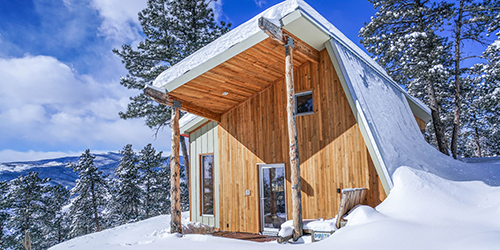 We recently came across an article highlighting how Colorado’s most energy efficient home is heated, and found it fascinating. Reliably heating a very small space can be surprisingly challenging. The heating method and source needs to be reliable, consistent, safe, and not over heat the space. One builder faced this challenge head on with fantastic results. Have a look at their story and how they provided the perfect solution.

How do you design a heating system for a home that uses barely any heat?

For builder Andrew Michler, the solution was to keep it as simple as possible.

It’s a challenge Michler faced in designing the MARTaK Rest/Work Space, a guest home adjacent to his existing house in mountainous Masonville, Colorado. The home is the first certified International Passive House in Colorado, making it the most efficient home in the state. In Passive House design, homes are built to be extremely airtight and super insulated, relying mainly on “passive” solar heat gain to stay warm.

To meet the certification program’s rigorous efficiency requirements, Michler used triple-insulated windows and wrapped the house in a thick blanket of cellulose insulation and mineral wool board, using a crawl space to add a high level of insulation to the floor. He was extremely careful with the home’s airtightness layer, testing the home continually during construction and correcting any gaps.

The resulting home nearly doubled the threshold for Passive House certification, with an annual heating load of just 2,500 Btu per square foot. Designing a heating system for such low demand is a unique challenge. The home gets most of its heat from the sun and waste heat from occupants and appliances, so a typical heating system would make the home way too hot. “I lose heat very slowly, so the amount of heat I need to put into the building has to be fairly minor,” Michler says.

Michler’s simple solution? A “good, old-fashioned” propane tank-style water heater. When the thermostat calls for heat, a pump circulates hot water through the home’s heat recovery ventilator and a radiant pipe in the central wall of the house.

The system makes the home surprisingly comfortable without requiring a lot of energy, Michler says. The hot water provides just enough energy to slowly fill the home with heat during a cold night. The central wall won’t even feel warm to the touch. It will just feel neutral, like the super-insulated walls and windows of the house, leaving occupants enjoying a steady, comfortable temperature. “Passive House is already a radiantly neutral building system,” Michler says. “It’s really a comfort system as well as an energy system.”

The heat generally kicks on when temperatures dip below freezing, which is common in the Colorado winter, Michler says. But the need for heat also depends on how much solar gain the home receives during the day. “A few cloudy days and it’ll start kicking on when it gets really cold,” he says.

Reducing energy usage is a central element of Passive House design, but it was also critical in this case for another important reason: Michler lives completely off the grid. He moved to an off-grid cabin in 1994, seeking a location that was semi-independent but still near society. “I went to school and learned a little bit about off-grid building in the early 90s, and I thought it was a really interesting approach, so I thought I’d tackle it,” Michler says.

Just as important, it was cheap. “My only bill is my propane bill,” Michler says. “I think it would cost me $60,000 just to bring electricity in. Once you dial in most of your energy systems, you don’t need that much electricity to run appliances.”

The home relies on solar photovoltaics for electricity, which is one reason why the propane water heater was the best choice for space heating and domestic hot water. “Heat pumps are getting really popular,” Michler says, “but being off-grid, I simply didn’t have the electrical budget.”

Electric cooking is a no-go for off-grid, solar-powered homes, so MARTaK has propane cooking equipment, which Michler considers a benefit, not a sacrifice.

Propane vs. electric vs. wood

While wood is the primary source of heat in Michler’s original off-grid home, it wasn’t a good option for the efficiency of the new house — or his lifestyle. “A lot of people think wood fires are really cozy, but after 20 years, wood fires are just work,” he says. “So they’re still kind of cozy, but I have better things to do than to clean up the dust in the house and to keep wood coming.”

And in a Passive House, even very efficient wood stoves can create a net loss of heat because of the flue coming through the envelope. “It’s a lot simpler and cheaper to use a different source of heat,” Michler says.

Because of the large energy load it requires, electric cooking is also a no-go for off-grid, solar-powered homes, so MARTaK has a propane-fueled kitchen. Michler considers that a benefit, not a sacrifice. “Gas has always been a favorite way to cook,” he says. He’s also considering a propane refrigerator. It would be an elegant option in such an efficient house, because the absorption chilling process would become an added heat source for the home.

In addition to being a builder, Michler is a sustainable building consultant (his firm is Baosol Adaptive Building Consulting) and author of Hyperlocalization of Architecture, a book he began around the same time he began designing MARTaK. He found the Passive House movement more appealing than other sustainable building programs, which called only for incremental improvements in buildings — 10 percent less water used, or 20 percent less energy.

“It just didn’t seem appropriate given our climate change issues and the state of the building industry,” he says. “We really needed systems that pushed us a lot harder.” With his own passive-energy house, Michler pushed the limits of traditional building techniques, finding simple but innovative solutions to the challenges of an ultra-efficient home.

Join our online community and stay in the loop with Infloor Heating Systems: